Within digital companies, the capability to execute population-scale digital experiments is considered one of the most significant drivers of their growth rates. Because they also experiment with attention online, these companies are constantly learning about the drivers and influencers of attention, and their effect sizes. More and more companies are specializing in the complex art of digital experimentation. They increasingly feed their experimentation programs with hypotheses based on behavioral and neuro-scientific insights. This article presents six digital experiments we did. Based on these cases we conclude with an actionable list of takeaways to influence attention online.

The ease with which we can influence attention

In our experiments we have come to realize how minor visual changes can hugely influence people’s attention processes. Some of our most impactful experiments are those that zoom in on where people focus their attention, and thereby, what they perceive.

As Stefan van der Stigchel’s article earlier in this issue explained, our attention can be directed in two ways: Bottom-up and Top-down . When applying this insight in a digital setting, it basically means that “even when people control their attention top-down, this attention can still be influenced by bottom-up processes.”’ The following examples show several ways to influence online attention, and how impactful these - often minor- alterations can be.

One very important function of attention online is “signal detection”; our basic instinctive response to important stimuli (bottom-up). Often, signal detection applies to the visual stimuli that stand-out or that trigger an emotional reaction: stimuli that you just have to look at (and possibly interfere with your top- down attention). This first case is an experiment on a German e-commerce shop that tried to achieve exactly that: make sure that people have to look at one specific product by using a tactic called “highlighting”.

This shop sells electrical devices. On their listing page we typically have over 60,000 visitors each week, in both the control and treatment conditions. Data analysis revealed that these visitors were often searching for a very specific type of product. Finding your specific product, however, is a challenge that involves searching with attention and focus through hundreds of options. One practical way to reduce this mental burden is to use the filters on the left side to lower the number of products displayed on the page. It might therefore help to make people aware of - and use - these filters. 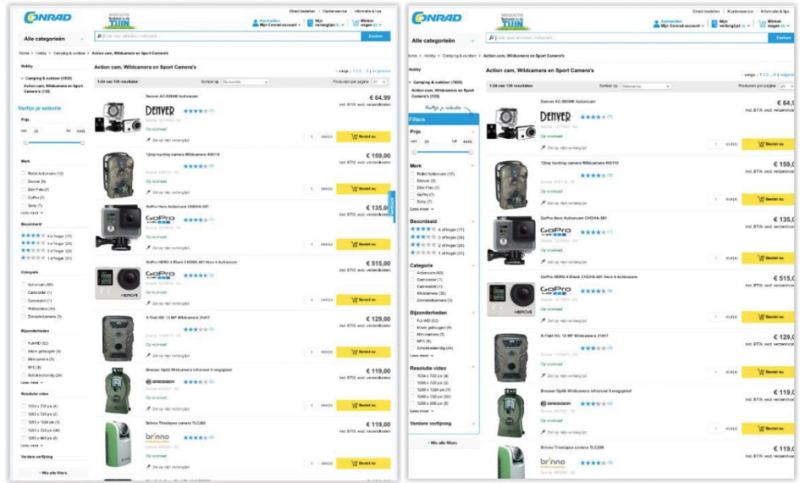 2. The paradox of choice?

The inconvenient truth about the above-mentioned experiment, however, is that – although it led to more filter usage
– it did not lead to more sales. Our behavioral experts then hypothesized that this might be due to an overload of filter options (although user feedback suggested the opposite: add more filters). The line of thought was “People seem to be goal-directed and therefore in conscious control, but our consciousness is easily overloaded with options and information”. Often - in the case of goal-directed behavior - winning experiments minimize the amount of visual and textual information and options as to minimize mental load and distraction, facilitating conscious control and attention.

In the second case the winning condition of the previous experiment B was therefore tested against a treatment with a lower number of filter options (C). This led to the same number of visitors that used the filter options, but in this case an increase in sales was realized (p=0.053). 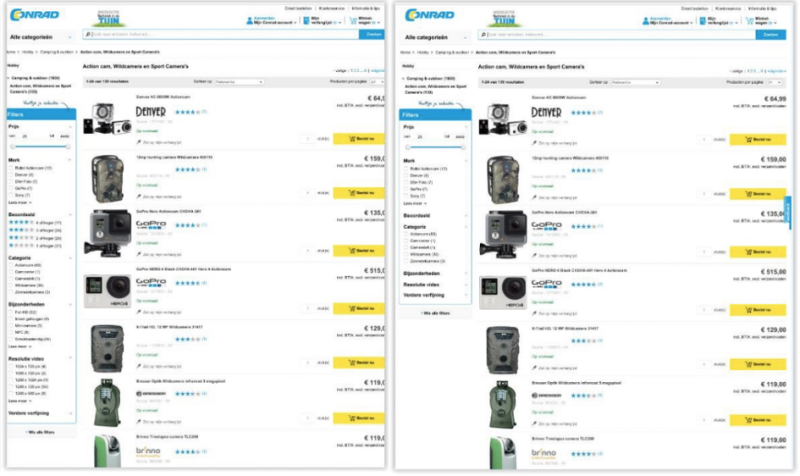 Variant B (control) and C (treatment with fewer filter options)

Goal-directed behavior is closely related to the top-down attention that Van der Stigchel dealt with in his article. Online we are often goal-directed, scanning web pages looking for cues related to the thing we consciously want to find. Imagine you are in Amsterdam trying to find a hostel for the night, and you remember someone advised a hostel with the word “flying” in it. In that case it’ll be easy to scan search results on your mobile until you recognize “the Flying Pig hostel”, without having to thoroughly process every aspect of each listed hostel.

That brings us to the fourth case: A global platform for booking hostel beds. On this platform we learned that there is a big difference between the behavior and outcomes of experiments among people who use a desktop versus mobile device. After hundreds of high-powered experiments, it turned out that it is not so much the device, but rather the difference in goal-directed intent of the visitors on desktop and mobile that creates this difference.

Users of mobile devices turned out to be more goal-directed than users of desktop devices. Their intent differed since mobile users were often in the midst of their journey searching for a place to sleep in the area. On the other hand, desktop visitors were still looking around, maybe not even sure if and when they would go and whether they would want to stay in a hostel or rather book a hotel. The intent was completely different, and asked for two completely opposite designs.

The following three cases were implemented on this global hostel-booking platform.

This experiment included deleting the top image that showed an appealing picture of the chosen destination (in online marketing called “the hero shot”). It was predicted that it would be distracting for the goal-directed mobile users, and positive for the intuitive, orienting desktop users, which was exactly what was found. The (goal-directed) users of mobile devices booked significantly more hostel beds in the treatment condition without the hero shot, yet (orienting) desktop users booked more with the hero shot.

Humans are social beings. We’re highly dependent on and influenced by “others”. Online marketers often proclaim that “social proof” is “a tactic that always works”. Luckily this is not true and human behavior is more complex than that. We don’t have a buying button in the brain that businesses can always trigger with a few basic tactics, as the following case shows.

To support the initial findings, many experiments followed (over a hundred, typically involving over 250,000 global visitors in each condition). More was learned about what works and what doesn’t for each of the two behavioral types. In addition, the two segments became more context specific. Nowadays, contextual aspects like “time-to-travel”, “country of booking versus destination” and more are included in the segmentation.

Moreover, the segmentation appeared to be situation dependent. In both the original as well as in a replication study of the above-mentioned case with testimonials, it was found that testimonials hurt sales on mobile devices, but only when people were using a 3G or 4G connection. Sales actually increased when people were using their mobile on a Wi-Fi connection. Why? We don’t know.

One final – and in my opinion key takeaway – is that these cases also show the value of “in-vivo validation”. Trustworthy digital experimentation is not as easy as is often claimed, but when set up, executed and embedded in a professional way, it can deliver huge amounts of trustworthy validations of all efforts to influence attention and consumer behavior in general.

References are available on request via office@nmbsa.com