Theory of mind (ToM) is when a person attributes mental states, which include beliefs, intentions, desires, knowledge, empathy etc. to one’s own self, to others and sometimes inanimate or anthropomorphized objects. It is now well understood that approaching human computer interaction (HCI) through a position of theory of mind allows scientists and HCI practitioners to maximize and humanize the interplay between machine and human.

If a human user begins to interact with a machine through a ToM position, endowing agency, intentionality and empathy (especially through anthropomorphic associations towards the machine or artificial intelligence [AI]), then the human user is likely to be more trusting, caring and engaged with the machine. They are likely to bond to the processes of interacting with the machine as an independent “agent”, as they would during an interaction with a real world human.

Neural Sense has been conducting several research studies and consultancy projects examining and optimizing the user experience in HCI which includes the development of Bots and artificial intelligent systems within both the financial services and IT software industries. The later has been exploring expansions of some already existing AI systems towards artificial general intelligence functioning, which would encapsulate a broader scope of machine learning and human interaction.

Our approach was to consider behaviors, cognitive and emotional processes within a theory of mind (ToM) framework. Hence, we were interested in how individuals responded to (machines) both Bots and AI in terms of the degree to which they could be experienced as intentional agents.

Many of our initial experiments were set-up to track interaction patterns between human respondents and chat Bots, mainly through a text and emoji interface on a mobile device application. These exploratory experiments examined various Bot responses and questioning patterns; Bot personality typologies, tonality profiles, and their associated human response sets. When analyzing these interactions with the Bot we used eye-tracking with Tobii’s Mobile Device Stand together with various sets of self-report questionnaires, as well as a systems usability scale. A large component of the analysis consisted of behavioral coding. In addition to iterative experiments and optimization runs we also included electroencephalography (EEG) as well as Galvanic Skin Response (GSR) and Facial Coding during full user journey engagements which were used to measure Alpha Asymmetry together with metrics for cognitive workload and emotional engagement.

As an example of one of the experiments, we examined the human respondents during a task whereby the Bot assisted them in acquiring a quick quote for short-term vehicle insurance. In this experiment, the Bot also asked the human respondent to complete specific manual tasks, including scanning their driver’s license and car license discs during their application for short-term insurance.

Research was conducted as part of an Agile development process, whereby experiments were conducted every two weeks over a six-month project timeline. This fast turnaround, iterative testing process enabled the development team to test their ToM hypotheses throughout the entire development process and take swift action to optimize each HCI during each developmental sprint phase. 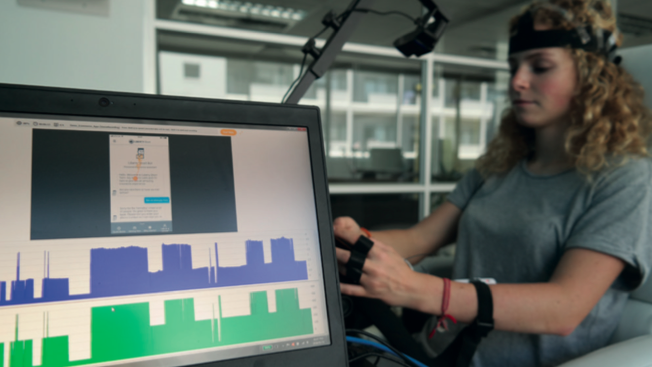 We found that a ToM framework provided a coherent and applicable structure within which to build experimental hypotheses to test the behavioral responses during human user and Bot interaction. In addition, a ToM framework provides a reliable theoretical backbone to interpret the results and data. We also found using this framework helps make sense of the behavioral cognitive and emotional responses of individuals when engaging with a machine, Bot or AI agent.

Some important key behavioral observation points that informed our ToM findings and considerations, which we have included as examples:
- The importance of introductory sequences and first impressions
- Length of responses of the AI and corresponding amount of text reading by human respondents
- Types and forms of questioning
- Length of interactions between Bot/AI and human respondent in a specific subject/topic
- Emotive Responding by AI in terms of quantity and appropriateness to the task
- Non-repetitive responding and variation in AI/Bot response sequences when human respondents’ get stuck or are uncertain of what to do in the current task or the current interaction (communication) appears dead ended

We believe using a ToM framework is an important theoretical and practical consideration when conducting consumer neuroscience UI and UX research with regards to Human Computer Interactions. Presenting our findings though this framework has assisted us in developing the most pragmatic and actionable optimization steps for our clients in helping them to develop the interactions between human agents and their Bot/AI agents that are appropriately engaging.