Involve the pricing story and environment 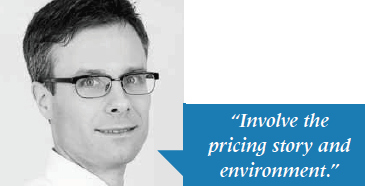 Humans rarely perceive things in absolute terms. Most things we see are influenced by their surroundings or by what we have seen in the past. Interestingly, even the way we perceive numbers is biased in this way. There is a category of numbers that is highly relevant for market success: prices. A product placed withing a plethora of higher priced products seems to be a good deal, while when placed among cheaper alternatives it will appear overpriced. A slice of basic chocolate cake at a price of €2.50 at a fancy pastry shop may seem cheap because it is surrounded by many expensive pastry creations. A slice of chocolate cake for the same price sold at the bakery next door, where a muffin or a brownie costs just €1, makes the cake appear overpriced.

It is fascinating that this effects remains even if the perceptual distortion is well-known. In one study subjects were explicitly informed about such biases. The participants' number estimates were still influenced by previously shown numbers. Because prices are somewhat arbitrary numbers associated with a product, they are especially susceptible to their surrounding and to surrounding prices.

This tip will appear in an article about retailing in the next edition of the quarterly Neuromarketing Theory & Practice.
Via Radboud University Nijmegen