ISS Integrated Facility Services is a leading, global provider of facility services. In the Netherlands, for example, they provide the catering facilities for Delta Lloyd. In the Delta Lloyd office, ISS has a restaurant and a coffee corner. The coffee corner is situated near the entrance to the office, but has not been given an unique style yet. In the Netherlands, coffee is often provided free to employees. Although ISS offers great products, the revenu of this specific service was too low. By creating a coffee corner with an up-market atmosphere we wanted to investigate in an experiment whether there would be a market for this service. Wouldemployees be willing to pay for good coffee and nice sandwiches if the character of the coffee corner changed? Consumatics focuses on cues that consumers cannot specify, but result in them feeling more comfortable and eventually spending more. Consumatics conducts research and supports the hospitality, retail and airport branches with scientific insight and knowledge of which elements of an outlet influence consumer behavior and create more hospitality. Examples are the use of plants, music, scent, POS material, loyalty cards, menu cards, and outdoor signs.

We chose a very practical approach for this experiment. The time frame of the project was three months. We started with semi-structured observations during opening hours. The next step was to give advice based on research about the subconscious behavior of -potential- customers in similar environments. The founder of Consumatics has performed specific scientific research on this subject for the hospitality industry in the past. This approach was also used for ISS. The advice was directly implemented by the team. 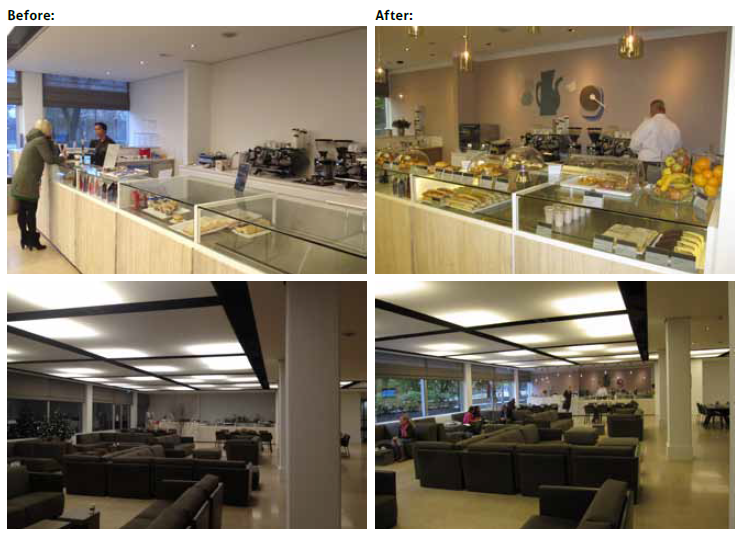 Factors to improve the total ambiance:
Background music was played (based on North, 1999, 2003; Kielstra, 2012; Areni & Kim, 2003 e.g.), the color of the wall was changed from white to pale pink (based on, for example, Clarke & Costall, 2007), brighter lighting was added to create a more positive store image (Vaccaro, 2008), and an oven was installed creating an appealing, fresh aroma.

Factors to increase sales:
More products were placed in and around the counter (closer to the senses), descriptive menu labels with names and prices were added (according to Wansink et al., 2002), and samples were given.

Factors to create attraction:
A sign was placed at some distance to prime people and lighting was also added to draw attention to the coffee corner from a distance. The team was trained and a brief report was created. The factors above illustrate that all five senses of the customer were stimulated, from sampling food (taste) to music (sound) and more. We wanted to see the effects of the changes in two ways; financially (revenue and amount of transactions) and personally. The financial factors were measured in revenue and number of transactions. The personal factors were measured by interviewing the team and customers.

Financial factors:
In this specific case it was only possible to attract more customers from people who work in the office and to create customer loyalty, which would result in each customer visiting the coffee corner more frequently. The project finished in February 2013. Until now (December 2013), the revenue has increased each month. In the first months it increased by 25%, and even more in the following months. The number of transactions per day has also increased. This confirms the assumption that office employees do value the service of good quality coffee in their own office.

Personal factors:
In addition to the financial factors, the soft factors also improved. Customers appreciate the store more, and another pleasing result is that the team employed at the coffee corner is happier to work there and proud of their store! This demonstrates that ambiance can support other elements. No changes were made to the products; the focus was on the atmosphere. The client was enthusiastic about the project and we evaluated it positively as well. The two photographs show the situation before and after the project.

Articles which are published on neuromarketing, mirror neurons, subconscious behavior and influencing behavior come alive in this case. Together with our own research in the area of consumer behavior and our hands-on mentality, we can combine science with

daily business. Based on past research, we recommend implementing the changes in-store together with the team. Our approach is not to introduce changes because “we think it works” or “we just wanted to change the lights”, but because we base our actions on facts. That makes it easier to get everybody on the same side!

Your customer has five senses, stimulate these to create the best experience!