The Influence of Oxytocin on Advertisements

This paper presents a neurophysiologic model (PMEP) of effective public service advertisements  (PSAs) and reports two experiments that test the model. In Experiment 1, we show that after watching 16 PSAs participants who received oxytocin, compared to those given a placebo, donated to 57% more causes, donated 56% more money, and reported 17% greater concern for those in the ads. In Experiment 2, we measured adrenocorticotropin hormone  (ACTH) and oxytocin levels in blood before and after participants watched a PSA. As predicted by the model, donations occurred when participants had increases in both ACTH and oxytocin. Our results indicate that PSAs with social content that cause OT release will be more effective than those that do not. Our results also explain why some individuals do not respond to PSAs.

Tradition research methods based on self-reports fail to deliver objective measurements of attention and emotional responses. By measuring the presence of specific hormones in the blood such as ACTH (corticotropin) and OT (oxytocin), we were able to collect information from the brain’s autonomic nervous systems.

We designed two experiments to test the PMEP. We used PSAs in our experiments because we could measure actual behaviors in response to these ads, donations to the featured charities, rather than simply attitudes. The novel part of the model is the role of OT, so Experiment 1 tested whether OT would affect actions in response to PSAs. In Experiment 1, we manipulated OT pharmacologically to establish a causal relationship between OT and donation decisions in response to PSAs. In Experiment 2, we sought to confirm the interactive physiologic mechanisms for attention and action in the PMEP. To do this, we measured endogenous changes in OT and ACTH levels in blood before and after participants watched a PSA from Experiment 1. 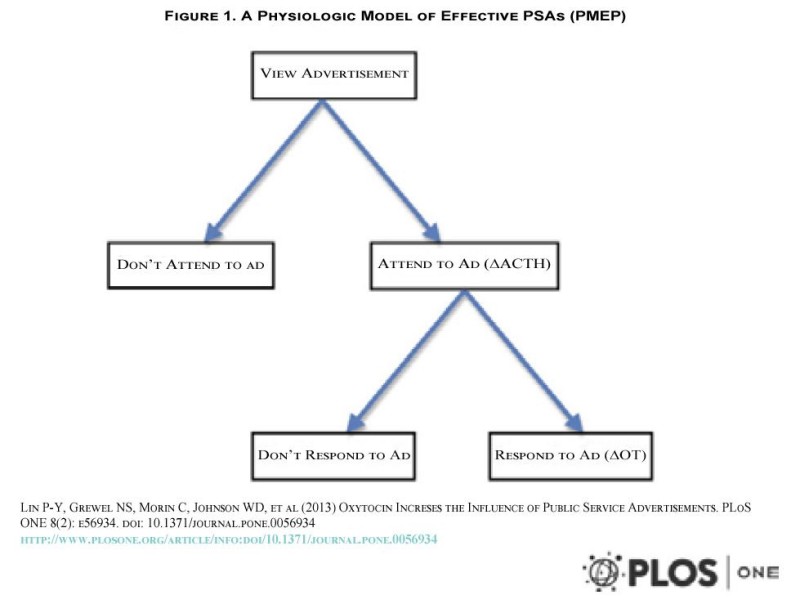 Participants who received OT made donations to 33% of ads, significantly more than those on a placebo (= 10.835,

Placebo: $0.54). Watching the anti-smoking PSA produced a significant increase in ACTH (M1 = 52.5 pg/ml, M2 = 59.1 pg/ml; two-tailed t-test, p = .01), indicating that the ad attracted most viewers’ attention. As predicted by the PMEP, the change in ACTH was positively correlated to attention to the ad (r = .38 p = .02). Overall, the change in OT was, in isolation, unrelated to the donation amount (p>.05). Both attention and engagement with the ad’s characters appear necessary to result in a donation

Advertisers obviously cannot spray OT during viewings of their PSAs, but the findings here, coupled with studies identifying the variety of stimuli that induce OT release, suggest several ways that PSAs and perhaps other marketing efforts that include social content can be made more effective. Indeed, our findings indicate that the brain may not distinguish triggers for OT release that occur in-person compared to those that are viewed through visual media. Activities that induce the brain to release OT include watching an emotional video clip, being trusted, being touched, attending a wedding, petting one’s dog, moderate stress, holding one’s infant, breastfeeding, sexual activity, and perhaps even Tweeting.

This approach indicates that effective marketing campaigns should be seen as ways to build relationships and solve customers’ problems rather than focusing on a one-time sale. Marketing that causes OT release is a step toward building an emotional relationship with a product or brand.