We depend on our eyes while navigating the retail environment. Without visual clues to orient ourselves, we become confused, frustrated and overwhelmed. In-store signage helps us get to where we want to go. It also helps retailers to:

To understand how in-store signage works, researchers frequently observe and interview shoppers. They look at sales data and even walk with customers who are willing to narrate as they shop. In 2013, Swedish researchers Tobias Otterbring, Erik Wastlund, Anders Gustafsson and Poja Shams undertook a field study to investigate how instore signage affects the visual attention and decision-making processes of shoppers. Eye-tracking devices, worn by volunteer shoppers, enabled Otterbring and his colleagues to quantify the amount of visual attention directed at instore signage. 1] These devices 2] made it possible for “researchers to watch what the subject’s watching, with the gaze point continuously marked onscreen …the footage transmitted wirelessly from the glasses.”

The team conducted two experiments that:

Experiment 1 investigated how store-familiar and storeunfamiliar customers use in-store signs to navigate and make decisions. One hundred and one volunteer test subjects were recruited while shopping in a market that functioned as the experiment’s setting. Unbeknownst to test subjects, thirty in-store signs were installed for the experiment. Half provided navigational clues, such as advertisements or information regarding nearby goods (Figure 1). 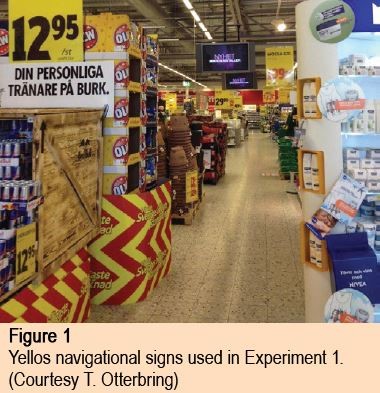 The other half provided decision-making information, such as discounts or product details (Figure 2).

it relates to shopping. Those undertaking the 15-minute experiment were fitted with a pair of Tobii Glasses and given a list of six items to retrieve. Test subjects were told that they would not have to pay for the items they selected 3] and were encouraged to act just as they would on any other shopping trip. Test subjects were free to choose whatever products they wanted, as long as they were on their shopping list. Shopping commenced at the entrance to the store. After retrieving their six items, test subjects had their eye-tracking devices removed. Then they filled out a questionnaire asking about their demographic information, store familiarity and navigational ability.

Researchers believe that, even with the assistance of in-store navigational signs, store-unfamiliar shoppers

expend most of their energy searching for products. By the time they find what they are looking for, they are too tired to read more signs. On the other hand, by knowing where their intended purchases are located, store- familiar customers save energy, which they can use to read signs at the store shelf. It follows that store managers, who desire to influence store-unfamiliar customers during the decision-making process, are fighting an uphill battle. Any signage they produce with this objective in mind should be simple, bold and “to-the-point.” Ideally, their signs should also offer a tempting value proposition.

Priming is a technique which exposes a subject to a stimulus that is intended to influence future behavior.

For example, imagine that it is hot out; you walk in a store and the first thing you see is a giant sign advertising ice-cream. Experiment 2 investigated how exposure to instore signage priming influences subsequent purchase decisions. Test subjects were recruited on-site and told that they would be participating in an experiment designed to explore visual attention, customer behavior and choice. The prime in experiment 2 was a sign displaying a photo of a muesli product. The sign was positioned next to the actual product and similar, closely priced substitutes.

Test subjects were exposed to the prime from afar. They were then instructed to walk over to the muesli shelf, select a box and deliver it to a researcher. After completing this task, test subjects returned their eyetracking glasses and filled out a questionnaire concerning shopping habits, product usage and demographics.

The results of Experiment 2 suggest that:

The researchers believe that in-store signage primes may be more likely to motivate customers if they offer a value proposition. As this was not explored in the experiment, it warrants further investigation.

In closing, I share a personal communication which I had with Tobias Otterbring, one of the researchers involved in the studies above. In this passage, he discusses future research possibilities…

shopping list, which, by implication, precluded us from studying phenomena such as unplanned purchases.

Therefore, one interesting suggestion for future research would be to investigate whether the specificity of the task at hand influences customers’ subsequent visual attention and choice behavior. Will an initial shopping task with a high (vs. low) level of detail lead to more or less visual attention being directed toward various instore cues at a subsequent shopping task?” These are the issues to investigate next.

This article was published in Neuromarketing Theory & Practice #11. Want to enjoy more excellent neuromarketing reading? Subscribe to this quarterly at www.nmsba.com/join