The story began almost two decades ago when our client, a major international food company, acquired a local snack brand. The brand had dominated in its category with 26% of the market share. It offered numerous flavor variants and was truly appreciated by its contented customers. Nevertheless, starting from 2004 a decreasing trend appeared, leading eventually to a dramatic drop to 16% in 2011. This became a catalyst for change and a decision to renew the brand’s image was made. A re-launch was carefully planned and preceded by extensive consumer research, market analysis and expert consultations. The new positioning - light and carefree snack - targeted to drive the brand back to its glory days. New ATL and BTL communication, as well as new package design emphasized the product’s new image, a guilt-free sweet. Unfortunately, all those changes didn’t bring the expected results and sales continued to remain in a downward trend.

Two years later, our client turned to neuro tools for any possible assistance. They had used neuromarketing research from NEUROHM quite successfully since 2007 but never before did they apply it to snacks. Nobody there had any experience with our field. We thought that was a good opportunity to introduce them to BioCode™, NEUROHM’s original Reaction Time analysis specifically designed to address strategic problems.

BioCode™ measures the speed of information processing when the brain produces an answer to a stimuli (Figure 1). Consumers’ declarations – explicit rational opinions – are listed along with their subsequent Reaction Time, which reflect implicit emotional certainty. BioCode™ distinguishes between explicit and implicit attitudes toward a tested brand. It uncovers emotional strength of attitudes to reveal what is truly convincing for consumers. 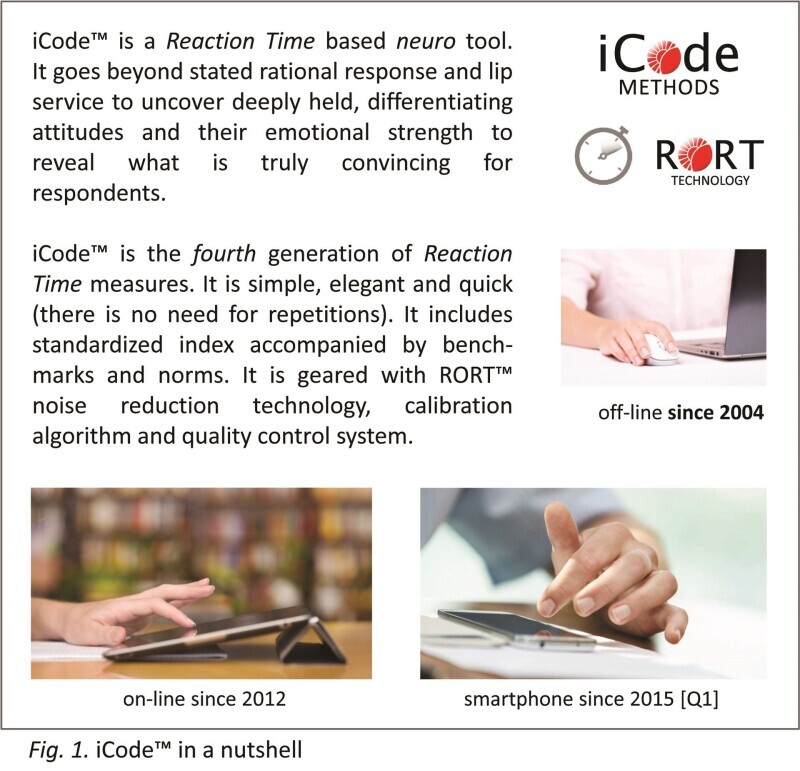 To enhance the power of BioCode™, we need to charge it with the most appropriate attributes describing brand’s image and personality. That is why we always organize a workshop for clients to help them prepare lists of the most suitable words or phrases (various techniques to activate creative thinking are quite helpful here). Importantly, we invite not only representatives of marketing departments to attend the workshops, but also representatives of sales and logistics units. This diverse constellation of people provides the most comprehensive and exhaustive perspectives on brands and products.

During a three-hour meeting with our client, we managed to work out a set of the right attributes. We were well prepared to start the field. BioCode™ is conducted online, reaching the n=160 requested sample took less than five days. Three days later, after data processing and analysis by NEUROHM, the workshop team was ready to meet up again.

Are you sure it tastes good?

What have we found out? Firstly, the customers truly believed in the new brand positioning – their reactions to attributes light, and carefree were very positive (see Figure 2a). It seems the original changes in communication were implemented with great effect. However, the “light” positioning was apparently not enough to increase sales. Secondly, the reactions to the yummy attribute puzzled everybody. The product was rated very well but the implicit emotional certainty reached only to a moderate level (see Figure 2b). It seemed as if consumers were not very convinced of their own statements.

BioCode™ consists of two workshops, the first one to create a list of attributes, the second one to thoroughly discuss the results before drawing conclusions and setting an action plan. As you can imagine, the marketers had a hard time believing the figures we presented at the second meeting. They honestly thought that consumers loved the brand and the taste of the product. Moreover, they had proof of it: each time blind tests were performed, they showed the product was evaluated as… very tasty!

An answer to this riddle came from an unexpected angle. The logistic department worker had pointed out that distribution of the product took over twice as long as for the competitors. It meant that when it landed on the store shelves it was no longer as fresh as theirs. At the same time, the items used for tests were delivered straight from a factory, fresh and yummy (this is why the blind tests results were so good). This disturbing finding revealed that the brand lost “yumminess” – a key product driver in the snack category. It is likely to be the very reason our client has lost so much of the market share in previous years. Unfortunately, no one was aware that the product no longer tasted as good, as on a declarative level the brand, a former champion, was still receiving good grades.

1. Instruments based on Reaction Time analysis are useful to diagnose market strategic problems. Getting to know consumers’ implicit emotional certainty equips marketers with knowledge on how to reduce risk of unfortunate business decisions. We advise applying such instruments at the earliest stage of planning.
2. During workshops, always try to hear about your brand from experts representing diverse perspectives. Only thanks to the modest logistic worker did we manage to solve the riddle. Without his brilliant remark, our tool BioCode™ would have been probably rejected as inconsistent with the blind test findings.

Coming back to our client, the marketers seriously considered the results and are now gradually implementing the learnings. The company focuses the advertisements on promoting taste and does its best effort to shorten the distribution time.

At the same time, the NEUROHM crew is armed with BioCode™ to track developments in the snack category perceptions and … is waiting with fingers crossed to see the improvement in sales. Stay tuned!