Are neuromarketing tools and research mostly suited for commercial companies? Or are these powerful instruments something we can or maybe even should use for non-profit goals as well?

A video commercial called “Eerder is Beter”, which translates as “The sooner, the better” and has a length of about 60 seconds. It shows young people in the process of drowning in water while suffocating, panicking and unsuccessfully trying to call for help. The message of the commercial is that it is important to help young people with mental illnesses before something goes terribly wrong. One other goal of the organization is to reduce stigmatization of people with mental health problems. We decided to test the eff ectiveness of the commercial by means of Neurensics’ state of the art fMRI research methods.

An fMRI study was conducted on the brain of the subjects (N=24), while they were watching the video inside the fMRI scanner. In order to be able to measure how a commercial or another marketing stimulus scores in terms of eff ectiveness, Neurensics has developed 13 fMRI ‘mappers’ for emotions that are related to the consumer’s behavioral change (see fi gure 1). Using proprietary methods, they have extracted multi-voxel networks from the human brain from which the reverse inference of these emotions is possible, a process they call mapping. On the basis of these neural mappers, Neurensics developed its unique 3D Brain Rating™ technology to determine the appreciation of all sorts of marketing stimuli, such as this commercial.

The test subjects were exposed to the “The sooner, the better” commercial. Consequently, they measured which of the areas became active when the subjects viewed the commercial, and to what intensity, whereby they were able to produce a relative score of the effect of the commercial on the brain. The 3D Brain Rating™ method allowed them to trace the activation of brain dimensions – emotional and behavioral responses to marketing stimuli – that are related to buying behavior. 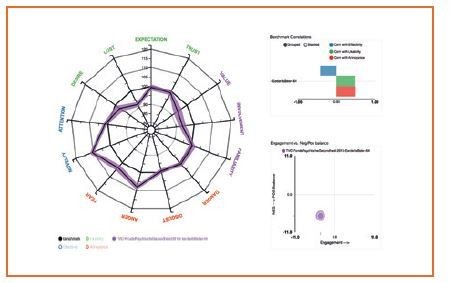 We measured how the “The sooner, The Better” commercial scored in terms of eff ectiveness. The results of the fMRI study are plotted for the 13 emotions in the 3D Mindmap (see figure)

The results show the video commercial stimulates negative emotions such as anger, fear and disgust. This indicates that feelings of aggressiveness, uncertainty and physical aversion are evoked by watching the commercial. Regarding positive emotions, both trust and expectation have an average score, but desire scores below average. This is an indication that the subjects had little feelings of wanting to “buy” the product, in this case the message.

Such a combination of high irritability, low personal involvement and a high likelihood of memory formation can be very damaging to the goals of the advertiser. Due to the highly negative feelings about the commercial, it is very unlikely that subjects will take action in line with the goals of the commercial, but instead are very likely to remember the negative feelings now associated with the subject of the commercial (young people with mental health problems) as well as the non-profi t brand shown at the end. If people should see the “The Sooner, The Better” commercial multiple times, a negative association with people with mental health problems would likely be reinforced.

Our findings underscore that neuromarketing research may be (even) more important for non-profits than initially thought. The combination of a lack of involvement, high memorization and significant negative emotions generated by viewing “The sooner, The better” commercial, make it likely that this advertisement contributes to stigmatization of young people with mental health problems, rather than reducing it, which is extremely worrisome. This study underlines the great value of neuromarketing research before publishing a marketing stimulus, especially when humanitarian goals are involved. As demonstrated, good intentions by non-profit organizations may in the end have significant negative effects on achieving their goal.

More neuromarketing research into non-profit advertising is urgently needed to assess whether there are more non-profit campaigns with a humanitarian purpose that are actually backfiring, undermining and harming rather than helping. Specifically for mental health non-profits, the link between stigma and negative emotions elicited by campaigns like “The Sooner, The Better” is of critical importance. Stigma can cause people not to seek help for mental health problems, too often with deadly consequences.

Generous grants: This research was made possible by funding from DiekstraOrangeWaterhouse Consultants, its shareholders, the generous support of the helpful team at Neurensics, as well as other donors.