Much like the old parable from India about a group of blind men and an elephant, the diﬀerent measurement methods commonly used in consumer neuroscience research can each provide useful insight into how audiences respond to marketing messages. But not one approach provides a complete picture of the nature of the beast. In order to circumvent the limitations imposed by individual measurement methods, we have been experimenting with a more holistic approach, one that applies a variety of methods to evaluate marketing communications.

To illustrate this integrative approach, we will outline here their application to a public service advertisement (PSA). For several years Nielsen Consumer Neuroscience has provided pro bono services to the Ad Council, a private, US-based, non-proﬁt organization that marshals volunteer talent from the advertising and communications industries, the facilities of the media, and the resources of the business and non-proﬁt communities to deliver critical messages to the public on issues such as improving the quality of life for children, preventive health, education, community well-being and strengthening families. Please see the NMSBA 2015 Neuromarketing Yearbook, p 14-15 for a prior example of this collaboration

In the current project we applied a suite of diagnostic tools to evaluate the eﬀectiveness of advertisements from the Ad Council’s “Fatherhood Involvement” campaign. These PSAs seek to inspire and support men in their commitment to responsible fatherhood. The PSAs communicate to fathers that their presence is essential to the well-being of their children. The campaign also directs audiences via a ﬁnal call-to-action to a URL and a toll-free phone number for parenting tips and other resources.

The current case focuses on one of the ads from a broader eﬀort, a 0:30 second PSA entitled “Cheerleader”. This humorous ad shows a father running through his grade-school daughter’s cheerleading routine to help her to practice. While participants (all fathers) viewed the ad, a variety of measurements were made, including measurements of central- (whole head EEG recordings) and autonomic- (GSR and heart rate) nervous system responsivity. Measurements of overt behavior including eye-tracking and facial expressiveness were also recorded, and post-viewing articulated measures of understanding and liking were also captured. The ad won a Bronze Lion at the 2009 Cannes Festival and inspired a Facebook page. It can be seen here:

The PSA itself begins with an older woman sitting by herself in an apartment, scowling as she hears loud noises from outside. The camera pans outside to reveal a large man enthusiastically engaged in a cheerleader song-and-dance, and then down to reveal his small daughter following along with her father’s example. After the midpoint, a voiceover intones, “the smallest moments can have the biggest impact on a child’s life.” The pair repeat the cheer and voiceover segues to a call-to-action that invites the viewer to call a number or visit a website to learn more. Consistent with the past popular and creative success of the PSA, participants rated the ad as highly likable on a post-viewing questionnaire. 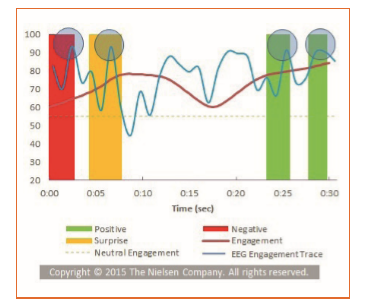 The implicit measures of viewer response (see accompanying ﬁgure) paint a more complex picture of engagement. The biometric “Engagement” trace reveals peaks of autonomic arousal for the reveal of the cheerleading father and daughter, and for the closing sequence. The “EEG Engagement” trace, computed from EEG-based measures of approach motivation, memorability, and attentiveness, shows a more complex series of peaks while the viewers build a mental model of the ad narrative. Facial coding suggests participants ﬁrst mirror negative emotion like that of the woman in the apartment, are surprised when the father is revealed as cheerleader, and are amused or happy during the closing sequence. 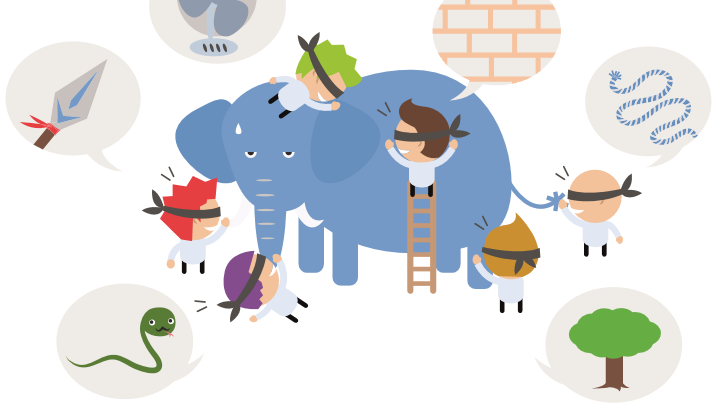 Diﬀerences between methods are also of key interest. The faster changes in the EEG suggest it may provide a more granular basis for making scene-level diagnostics. Furthermore, the directionality of emotional expression provided by the facial coding results may improve interpretation of the EEG and biometric responses. However, it is important to also note responses observed in the EEG trace in the absence of systematic changes in facial expressions, suggesting that FACs in isolation may miss signiﬁcant neural changes.

A variety of methods were used here to provide an integrated view of audience response. Results suggest that this integrative approach provides valuable information above and beyond what such techniques provide in isolation. While biometrics and neurometrics provide detailed scene-level diagnostic information, more obvious measures such as that provided by facial coding and eye tracking can sometimes provide additional input concerning the viewer’s implicit emotional response and the speciﬁ c aspects of scenes driving that response. Together with articulated reports these techniques collectively provide a route for envisioning a more holistic picture of the audience response to advertising.

“So, oft in theologic wars
The disputants, I ween,
Rail on in utter ignorance Of what each other mean,
And prate about an Elephant
Not one of them has seen!”